What is a Sourdough Starter

A sourdough starter is how we cultivate the wild yeast in a form that we can use for baking. Since wild yeast are present in all flour, the easiest way to make a starter is simply by combining flour and water and letting it sit for several days.

Your starter is just flour and water – that’s it! That’s all your wild yeast needs to feed and grow. Your starter will live for many years given the right growing conditions and the right food.

How does a Sourdough Starter work?

Yeast is present on the surface of cereal (eg wheat, rye) grains. When those grains are crushed to flour, and that flour is then mixed with water, the yeast will begin to multiply and thrive. As the yeast feed on the flour, they produce carbon dioxide gas.

Over time, if more flour and water are provided, and the mixture is ‘refreshed’, the yeast colony will become more concentrated. Eventually, the mixture will produce enough gas that, on adding it to a dough, it will raise that dough to form bread.

Alongside yeast, bacteria also thrive in the mixture. Those which are beneficial to sourdough making, including lactic and acetic acid bacteria, will multiply well alongside the yeasts present.

These bacteria produce acids that contribute to the flavour and texture of sourdough breads. These acids may also help preserve breads made with the mixture, lengthening its shelf life.

How to make sourdough starter from scratch

So as you can see, we’re not using anything you probably haven’t already got in the kitchen.

You will initially need two storage jars, but this is just how I do things. Rye flour can be purchased from most supermarkets, along with bread flour. My own preference is to use only organic flour. It seems to have a higher concentration of wild yeast, and it fits in with my food ethics.

The starter we’re going to be making will use equal parts of flour and water by weight. We’ll refer to this later on as a 100% starter. 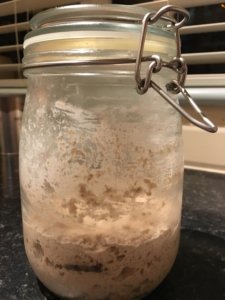 Weigh the flour and water, and combine them in the container. Stir vigorously until combined; it might look like a sticky, thick dough. Scrape down the sides and loosely cover the container with cling film or with a clean kitchen towel secured with a rubber band (I often just remove the rubber seal from the jar and just lay the lid back on top – do not seal tightly!!!).

Well, that’s it for 24 hours. I’d take a rest now, maybe pour a G&T to recover from all that hard work.

Okay, so we’re at Day 2. You might see some small bubbles in your starter, this is good. But don’t worry if you don’t, it’s all good still. The bubbles just mean the yeast has started working.

Weigh out the flour and water for today. Stir this into the mixture you alread have, until it’s all combined; it might look like a sticky, thick dough. Scrape down the sides and loosely cover the container with cling film or with a clean kitchen towel secured with a rubber band (I often just remove the rubber seal from the jar and just lay the lid back on top).

That’s all for day 2! Seriously hard work this sourdough lark isn’t it?

Okay, so we’re at Day 3. Now is the time to throw some away – yep, really! If we don’t throw some away now we’re going to end up with a mountain of starter by the time we’ve finished. This stage is called “refreshing your starter“.

Now you’ve thrown 60g away, you should have 60g left in the jar. To this we’re going to mix our usual amount of flour and water as we did in day 1 and day 2.

All we’re going to be doing is discarding and feeding for the next few days. So just repeat Day 3. At the end of every discard and feed we’ll have 120g of starter.

You’ll notice in the photographs of my starter jar a black line. This line marks the top of the starter once it’s been refreshed (discarded and fed). As the starter becomes more active you’ll begin to see bubbles on the top and, if you’re using a glass jar, bubbles around the sides of the starter. This is good news!

Your starter is nice and active.

We’ll call the bubbles yeast farts! As the natural yeast consumes the sugars in the flour, they fart out carbon dioxide, resulting in bubbles (I’m giggling, farts are funny!)

You’ve probably noticed by now that your starter has a “cycle”. That being it rises, maybe doubling or even tripling in volume (depending how farty your yeasts are), before collapsing and sinking back down.

Once the starter begins to collapse, this is when all the food in the starter has been consumed. This is the ideal point we need to “refresh” the starter. See Day 3 – The Refresh to refresh your memory.

How to use your starter

Never use up all the starter in the jar. This is going to be your constant, or Mother as it’s known.

If a receipe calls for 100g of active starter, take out 50g of starter from your Mother starter and feed that with 25g flour (doesn’t have to be a mix of flour now, plain white bread flour is sufficient) and 25g filtered room temperature water.

Now our Mother will be down to 70g. To keep the maths constant, throw away 10g of the Mother, leaving you with 60g. I bet you can’t guess what’s coming next?

Yep, we’ll feed our Mother exactly as we did from day 3, 15g rye flour, 15g white flour and 30g filtered room temperature water. Leaving us with 120g Mother in our jar.

You can keep your starter in the fridge in between bakes. This is especially useful if you don’t bake every day. If not kept in the fridge, your starter will need feeding each day with new water and flour, which can be wasteful if you’re not going to bake.

Once in the fridge, the yeast and beneficial bacteria will slow down, almost to the point of inactivity. You may find, if your starter has been in the fridge a while, you may need to do a couple of feeds in order to kickstart your starter back into life.

Generally if I want to bake bread on a Sunday morning (what’s better than the smell of freshly baked bread in a morning?), then I get my starter out of the fridge on a Thursday morning, allow it to come to room temperature. Friday morning it gets fed, then saturday morning you can start to prepare the dough.

Try the No Knead Sourdough as your first loaf. You’ll be amazed!

Made with the simple basic ingredients of flour, water and salt; there are three distinct stages to making a sourdough loaf (1) The Starter (2) The Ferment and (3) The Dough itself.

A little bit about this site

I want to offer and share information, tips, techniques, recipes and tools for the home baker, with an above average interest in the art of sourdough bread making.

This site uses cookies. By continuing to browse the site, you are agreeing to our use of cookies.

We may request cookies to be set on your device. We use cookies to let us know when you visit our websites, how you interact with us, to enrich your user experience, and to customize your relationship with our website.

Click on the different category headings to find out more. You can also change some of your preferences. Note that blocking some types of cookies may impact your experience on our websites and the services we are able to offer.

These cookies are strictly necessary to provide you with services available through our website and to use some of its features.

Because these cookies are strictly necessary to deliver the website, refuseing them will have impact how our site functions. You always can block or delete cookies by changing your browser settings and force blocking all cookies on this website. But this will always prompt you to accept/refuse cookies when revisiting our site.

We fully respect if you want to refuse cookies but to avoid asking you again and again kindly allow us to store a cookie for that. You are free to opt out any time or opt in for other cookies to get a better experience. If you refuse cookies we will remove all set cookies in our domain.

We provide you with a list of stored cookies on your computer in our domain so you can check what we stored. Due to security reasons we are not able to show or modify cookies from other domains. You can check these in your browser security settings.

We also use different external services like Google Webfonts, Google Maps, and external Video providers. Since these providers may collect personal data like your IP address we allow you to block them here. Please be aware that this might heavily reduce the functionality and appearance of our site. Changes will take effect once you reload the page.